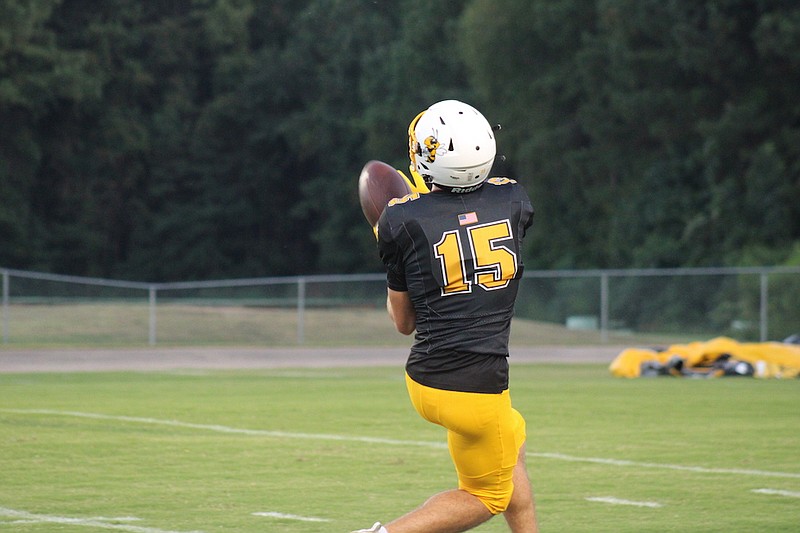 The Hornets came into the 2022 season with only two players starting on both sides of the ball. Junior quarterback Caleb Johnson and junior wide receiver Landon Garrett are also the starting cornerbacks on the defensive side of the ball. They are not based on depth, but rather, they are highly efficient in man and zone coverages. Junior Brock Simon and sophomore Peyton Ross are players who found themselves starting on both sides of the ball at the offensive and defensive line based on their reliable playmaking abilities.

They are fast and explosive playmakers at the offensive skilled positions at running backs and wide receivers. At running back, the Hornets like to run the ball with speed with sophomore Damariyon Billingly, junior running back DaVonta Hubbard and Landon Garrett. They like to keep the backfield fresh legged for big plays when the drives are extended.

At the receiver group, Harmony Grove has a lot of different set of playmakers including returning starters from last season in Garrett and senior Gabe Johnson. Senior Shamar Patterson is a player that can be utilized as a slot receiver and an extra deep threat receiver. Among some of the depth receivers for the offense of Harmony Grove is junior Andrew Taylor, who caught his first receiving touchdown of the season on a 37-yard pass from Caleb Johnson last week against Cave City.

On the defensive side of the ball, the Hornets have several groups that come in and provide consistent playmaking and rest for the starts. Brock Simon stepped into the starting role at defensive end after the injury to Quinton Jones and has been a consistent play maker since stepping into the starting role. Senior Garrett Johnson was converted from outside linebacker to the defensive end position to help provide solid pass rush. Johnson is a player that comes in long passing play situations and applies pressure to the opposing backfield. He is an edge rusher that Harmony Grove calls upon every game.

Another player that stepped into the starting well after a key starter was out with an injury is sophomore Justin Tillery. Not is he filling in for the injured Cannon Booker, but he has played at highly efficient level of defending against the rushing and passing game. Tillery accounted for 17 total tackles, three tackles for loss and a forced fumble in the game against Haynesville.

In the secondary, the Hornets needed multiple players from the bench to step up and provide reps so Garrett and Caleb Johnson. While player Tristen Herndon stepped up as a starter in week one of the season, the Hornets found players like juniors Christian Montgomery and Javion Gill become reliable playmakers within the past few weeks. Last week in the 54-14 over Cave City, Gill accounted for an interception.