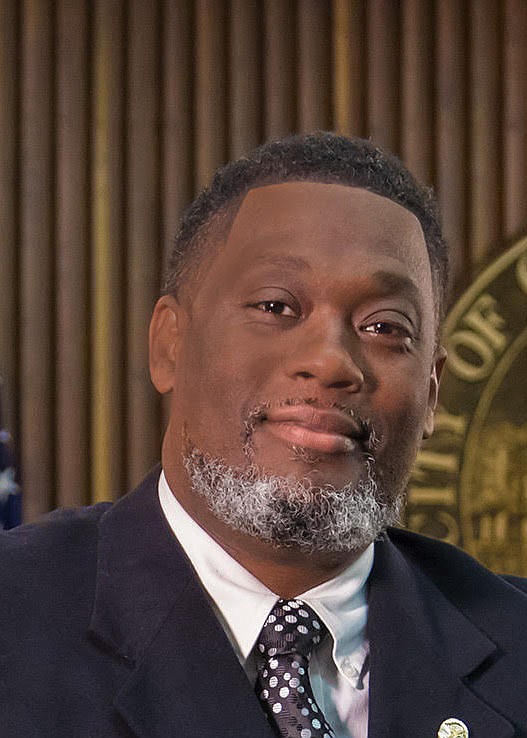 A former employee of the City of Camden is accusing Mayor Julian Lott of sexual harassment, according to a lawsuit filed on September 29 in Ouachita County District Court.

In the suit, former assistant mayor Amy Perrin alleges that Lott made repeated sexual advances toward her and that when she rebuffed him, he retaliated against her professionally.

The suit names Lott as a defendant, as well as the City of Camden.

In the suit, Perrin alleges violation of the Arkansas Civil Rights Act, "outrageous conduct" by Lott, and wrongful termination. The suit requests damages to be awarded due to Perrin's alleged loss of past and future income, medical bills she sustained as a result of the harassment, extreme emotional distress resulting from the harassment, pain and suffering and "other damages, all in a sum and amount in excess of the minimum amount necessary to confer jurisdiction upon the United States District Court in a diversity of citizenship case."

The 17-page document states that when Lott was first elected, Perrin was "enthusiastic and happy, beginning service ... with admiration regarding his vision for the city." She "respected him for his work ethic and determination."

The suit alleges that as "Lott became more comfortable in his position and more comfortable with the personnel at the municipal building his behavior changed progressively. At first it was subtle in regards to a sexual relationship with the Plaintiff."

In May 2020, the suit alleges, Lott asked Perrin to have sexual intercourse with him, "as he promised she would like it." She refused, "and her career as an employee of the City of Camden was placed in such a position that she had to fear for her job and physical safety every day thereafter," according to the suit.

According to the suit, when Perrin refused Lott's advances, "he set a standard of attempting to make her fail in her job duties by withholding necessary information needed to effectively do her and his job, such as withholding information, ignoring calls, texts, emails and assigning last minute deadlines.

"On numerous occasions Lott withheld information or extended periods of time, only forwarding when a day or two before deadline. This was done in retaliation for Plaintiff refusing Lott's request for sex," the suit alleges.

Lott also allegedly spoke to Perrin about "his infidelity, sexual conquests and prowess" and told her that "nobody refuses him," and thanks to his status as mayor and senior pastor at Koinonia of Grace Church, "nobody will believe" her if she came forward with allegations of harassment against him.

Perrin also alleges that the situation caused her stress to the point of affecting her physical health resulting in PTSD (Post-Traumatic Stress Disorder), migraines and hypertension.

A whistleblower who was not Perrin came forward about the sexual harassment toward the then-assistant mayor, but Perrin says in the suit she remained silent "out of fear of" Lott and losing her job. She eventually agreed to give a statement to the city, but before she could, her employment was terminated, according to the suit.

A Notice of Termination signed by Lott but not Perrin states, "I was advised by Ms. Stewart (City Clerk)that unless Mrs. Perrin can be off on (Oct. 14-19) Mrs. Perrin wants a pink slip. Her time was not accrued from past absences."

The suit alleges that the statement on the pink slip was untrue, "embellished" and meant to mislead "as a joint effort ... to prevent (Perrin) from providing annual medical appointments for her daughter."

In 2021, Perrin told the Camden News, "In regards to being pressed to make a decision between my child's life or continue to undergo circumstance there, I chose her and I will every time. And I think it's sad that someone who used my child to get fame -- TV, newspaper, Internet -- would use the one thing he knew I would never give up on. She has a life threatening issue and an annual appointment. This isn't a surprise; it's annual. It was just utilized in an unfortunate manner."

When reached for comment Mayor Lott denied the allegations telling the Camden News, "I have not been served anything. No one can do anything until we get served. I found out they have a 120 days to serve it, they can give it to everybody they want to before they give it to me..So, imagine being me right now...We can't do anything. The city nor myself has been served It ties our hands on what we can do....She's lying about it.It's just an allegation, it's just a rumor until then."

Perrin, when reached for comment stated, " The complaint has been filed online."

City Attorney Michael Frey state, "I would say unfortunately I'm not going to respond to each detail, once it gets to the point of having a lawsuit filed. I would rather our response be in court."

This is a developing story and the Camden News will provide updates as they become available.