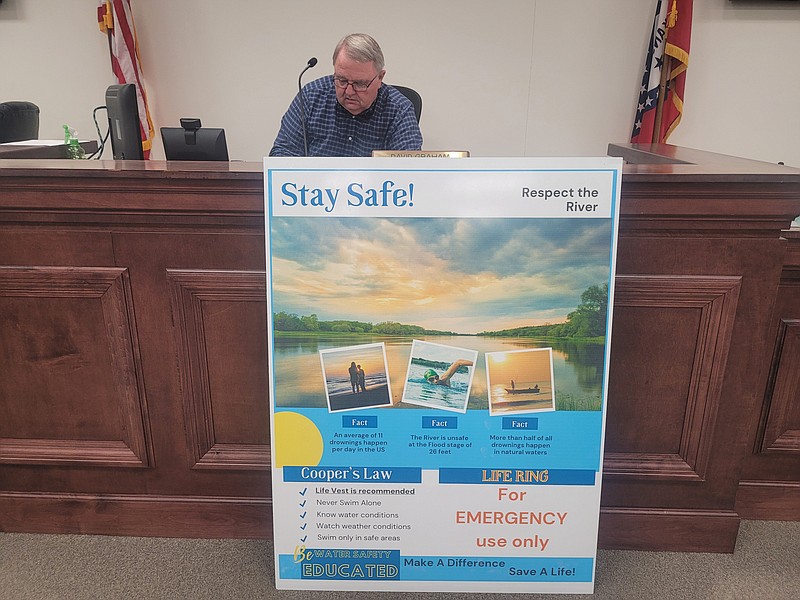 Photo by Bradly Gill A sign displaying river saftey information was presented to Ouachita County Quorum Court last night by Sherri Steelman. The Quorum Court apprvoed the placement of said signs last year after the drowning of a local teenager in the Ouachita River.

The Ouachita County Quorum Court held their first meeting of the year on Tuesday, when they set their meeting schedule for the remainder of 2023 and saw safety signage that will be placed along the Ouachita River.

Sherri Steelman presented a sign that will be displayed along certain points of the Ouachita River promoting water safety.

The sign displays facts such including "an average of 11 drownings happen per day in the U.S.," "the Ouachita River is unsafe at the flood stage of 26 feet" and "more than half of drownings happen in natural waters."

The sign goes on to recommend visitors wear a life jacket, not swim alone, know the condition of the water and watch weather conditions.

Additionally, Keri Weatherford of the Ouachita Extension Agency told Justices of the Peace that the Extension Agency is looking to reform the Ouachita County Cattlemen's Association and asked that any interested producers contact the Agency. The county extension office can be reached at 870-231-1160.

During new business, JPs voted unanimously to approve a resolution approving an application for funding from the Arkansas Natural Resource Commission.

"I've been speaking to you guys now about a year about a pipeline north of the river that will pipe water from Shoemaker Treatment plant back to the river. They have perimeter limits because they're dumping into a zero flow creek there at the county line, so they have to limit the people that they can put on their sewer treatment. If they have a way where they have an unlimited effluent release then it will open up for more Economic Development north of the river," County Judge Robert McAdoo said.

McAdoo said the project would cost about $5.2 million to complete..

In other business, JPs unanimously agreed to appropriate $3,167.45 to the Circuit Clerk budget to purchase a firewall (a computer network security system). The funds will come from a check received from Arkansas Association of Counties for Automated Records System Fund.

Additionally, the Quorum Court set their monthly meeting date as the first Tuesday of the month at 6:30 p.m. in the Ouachita County District Court room.

At the end of the meeting, Sheriff David Norwood told the assemble JPs that the County might need to adopt a resolution in which county inmates -- but not city, federal or state inmates -- are charged a co-pay for procedures like x-rays and nursing visits. No action was taken at this month's meeting.