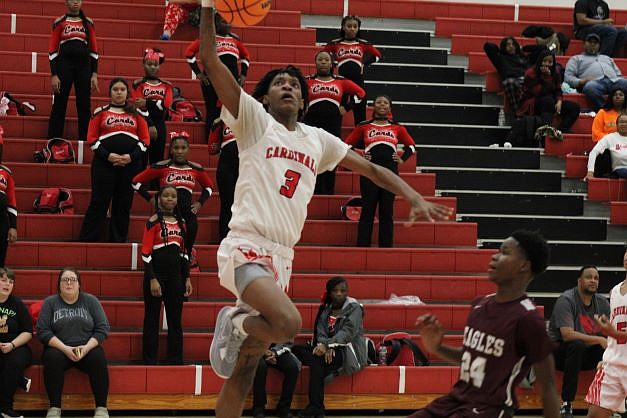 Photo By: Michael Hanich Camden Fairview forward Traveon King drives to the basket for a dunk in the game against Crossett.

High school basketball is entering into the final stretch of the regular season, with teams set to finish out the last month before regional tournament play starts.

All six varsity teams in Ouachita County are on pace to surpass the regular season milestones set last season. This will be a time for the boys and girls teams of Camden Fairview, Harmony Grove and Bearden to maintain established rhythms and finalize key lineups to counter their opponents when tournament play starts.

The Cardinals are a team that is playing well in the post, with Reed finding scoring opportuninties for dynamic shooters like King, senior point guard JyMarion Hopson and sophomore shooting guard Kyleston Gill. They play well on the defensive end of the court, with discicpline and determination to finish. The Cardinals will go on the road to take on the Malvern Leopards (4-7; 1-4) this Tuesday.

The Camden Fairview Lady Cardinals (10-7; 1-3) started the season 7-1, but have run into some of the top teams in the state. The Lady Cardinals started last week with a tough home loss against the Arkadelphia Lady Badgers 79-45. They were able to rebound and account for their first conference win at the home against Ashdown 54-31.

The Lady Cardinals spread the ball throughout the court against Ashdown, with many players putting points on the board. Senior forward Karmen Johnson was the team's leading scorer once again with 10. Sophomore guard Brae'yana Hargraves scored nine points for the Lady Cardinals.

After losing to Magnolia, Nasvhille, and Arkadelphia (all over ten wins), the Lady Cardinals are hoping to establish a more consistent rhythm after a brutal conference schedule start. The Lady Cardinals are set to go on the road to take on the Malvern Lady Leopards (0-13; 0-4) this Tuesday.

The Harmony Grove Hornets (7-10; 1-5 in 3A-8 conference play) are efficient and more competitive than they have been in the past couple seasons. On Jan. 6, the Hornets accounted for their first conference win as a program since the spring of 2020 with a 64-58 road win over DeWitt.

The Hornets played in three home games last week. They went 1-2, with losses against Dumas (14-7) and Smackover (13-7) and a dominating 58-28 win over Gurdon. The Hornets have the talent and the drive to push for some big wins once regional play starts. The biggest factor they will need is experience when it comes to crunch time. Harmony Grove is set to try for another program-building win on the road versus the McGehee Owls (5-8; 4-2).

The Harmony Grove Lady Hornets (6-12; 2-4) are also on the rise and continuing to improve. They were able to get their first conference win of the season on Jan. 5 with a 59-45 score against Hermitage. The Lady Hornets ran into some tough offensive performances in three consecutive losses at DeWitt, at home against Dumas and at home against Gurdon.

They were able bounce back on Friday, Jan. 13 with a 49-36 win at home against the Smackover Lady Buckaroos. This team can play well on both ends of the court and exploit holes in their oppositions' game. Like the boys' team, the Lady Hornets are looking to establish that rhythm in crunch time so they can also become regional tournament threats. Harmony Grove is set to go on the road on Tuesday against the McGehee Lady Owls (9-4; 4-0), the only undefeated team in conference play.

The Bearden Bears (7-5; 5-3 in 1A-8 conference play) are off to a strong start in conference after their most recent victories. Last Tuesday, Jan. 10, Bearden shut down the Friendship Aspire Southeast Warriors 69-33 thanks to a standout performance from a trio of seniors. Guard Trea Harding led the team with 24 points, followed by center Thomas Brunston who scored 19 points and guard Javion Love with 18 points.

In the Bears' 65-46 homecoming win against the Hermitage Hermits, senior guard Royce Cones led the team in points scored with 18. Love was the team's next scorer with 16 points followed by 14 points from Thomas Brunston. The Bears can attack the basket in the paint, driving through lanes for easy layups, or shoot from the the three-point arc. They will have a big road test this Tuesday as they take on the Nevada Blue Jays (18-3; 7-0), the only undefeated team remaining in their conference.

The Bearden Lady Bears (8-4; 5-3) are one of the most stout and aggressive teams in south Arkansas. They play a highly efficient lockdown defense, where they can contest every shot and quickly close off driving lanes. Last Friday night, the Lady Bears took down the Hermitage Lady Hermits 63-48 thanks to their dynamic playmaking on offense and their shutdown defense through the first three quarters. Senior forward D'Mya Flint accounted for 16 points and 20 rebounds.

The Lady Bears look to extend their wining ways as they go on the road to take on the Nevada Lady Blue Jays (4-13; 3-4) this Tuesday night. 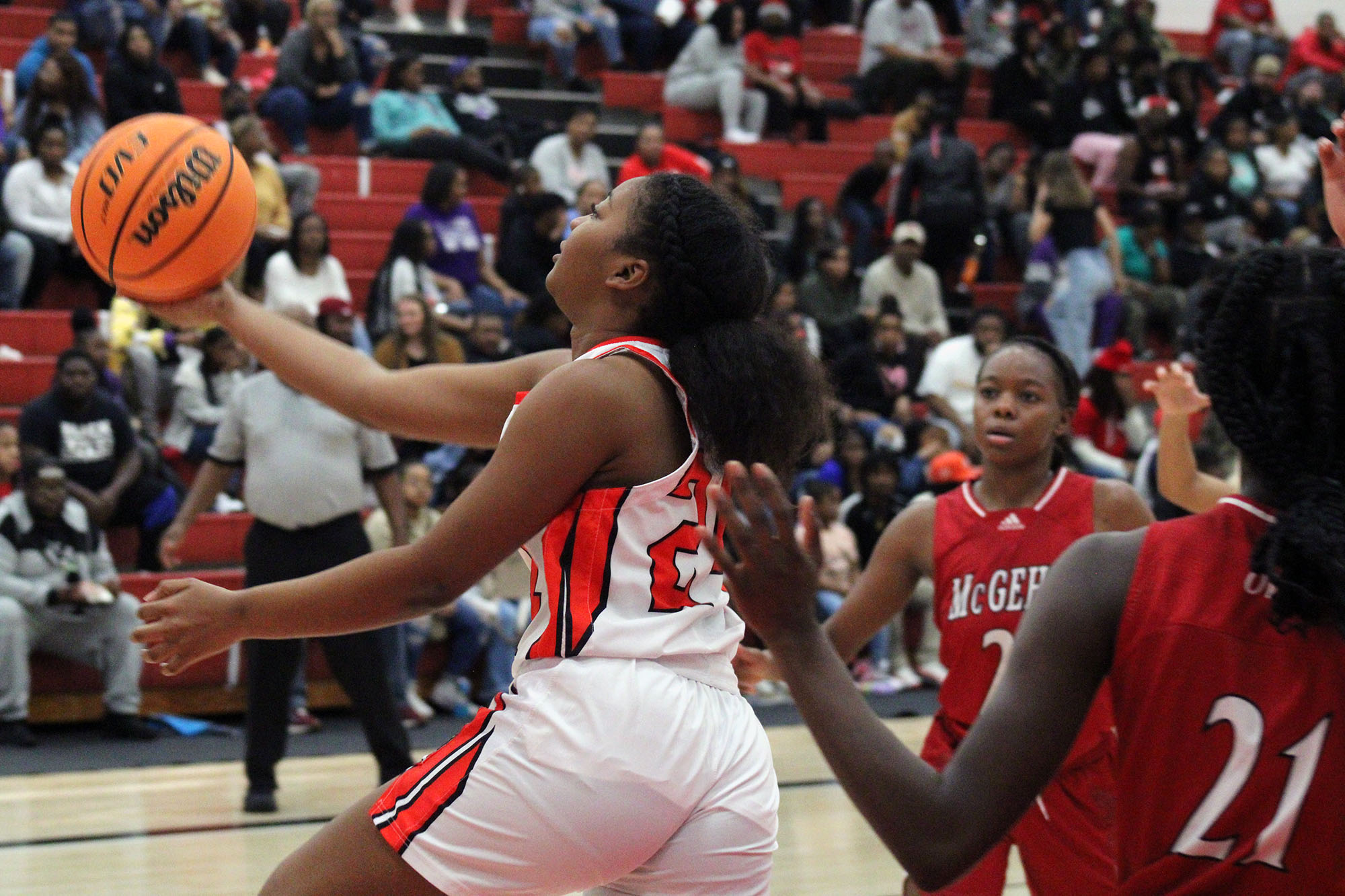 Photo By: Michael Hanich Camden Fairview guard Michaela Griffith drives to the basket in the game against McGehee. 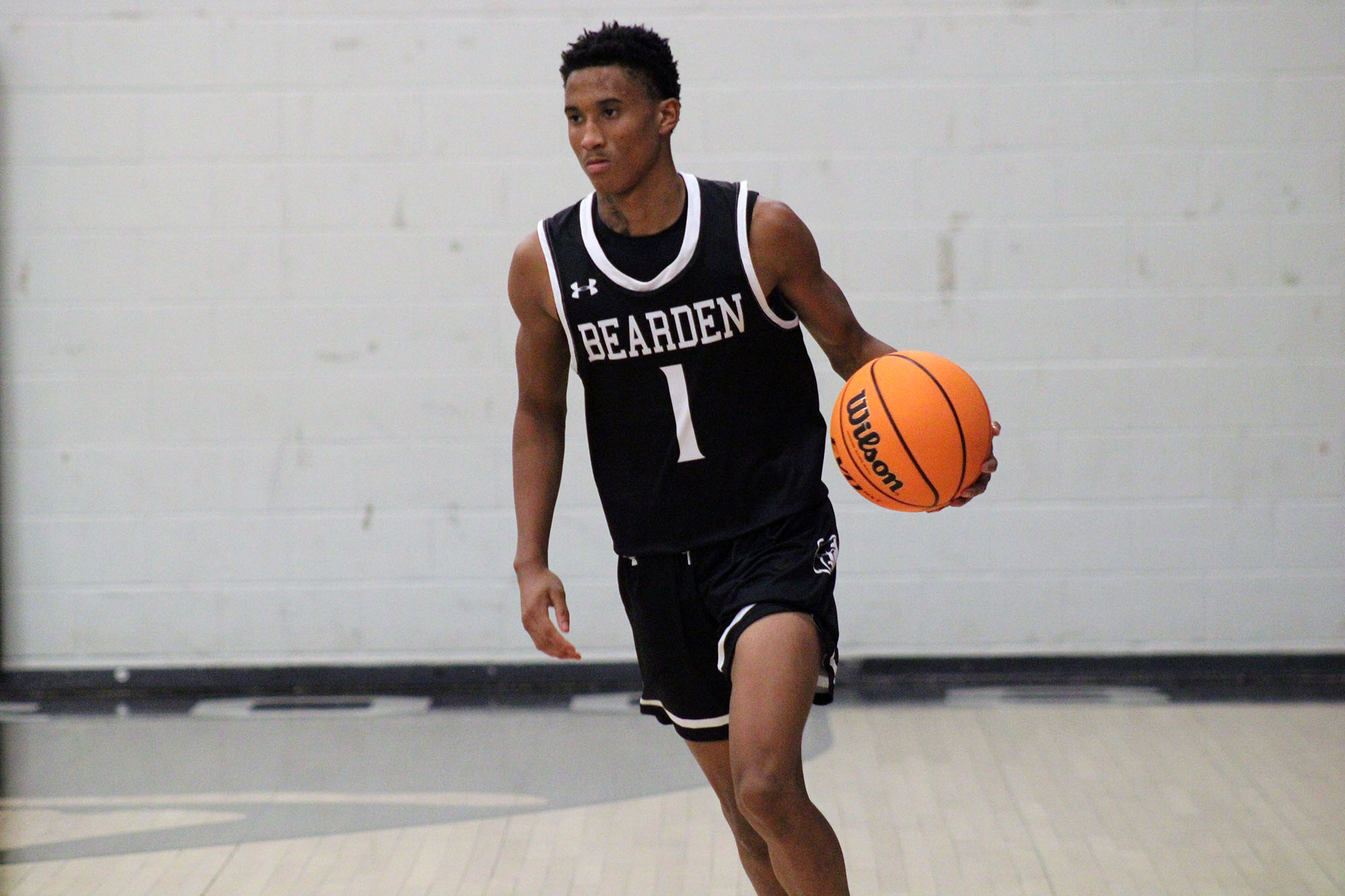 Photo By: Michael Hanich Bearden guard Javion Love drives the ball down the court in the game against Smackover. 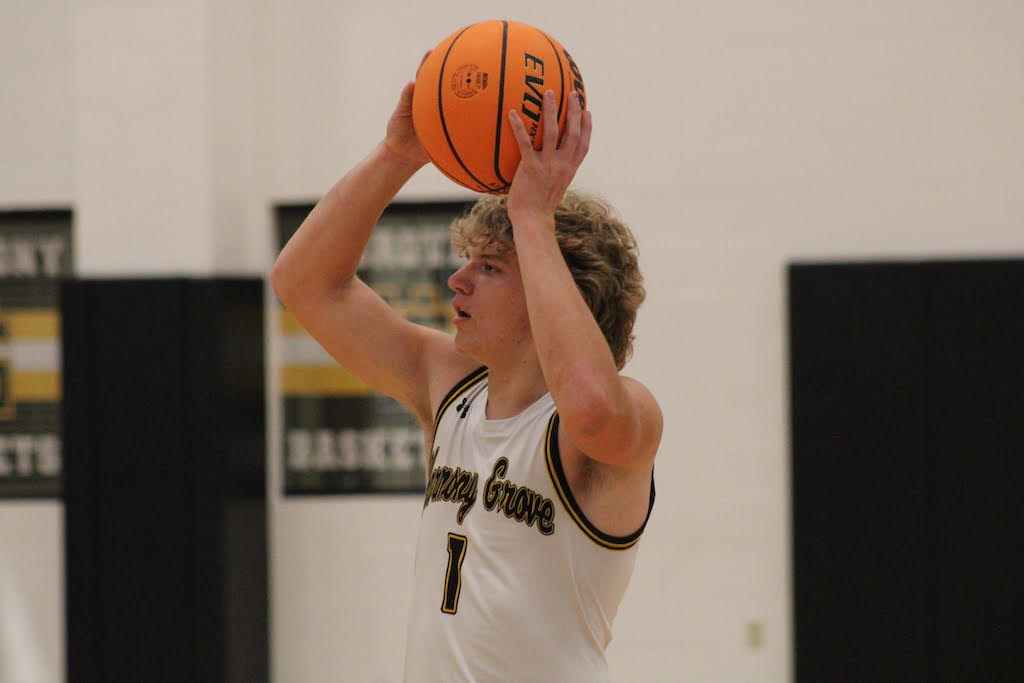 Photo By: Michael Hanich Harmony Grove guard Caleb Johnson looks to pass the ball in the game against Lafayette County.