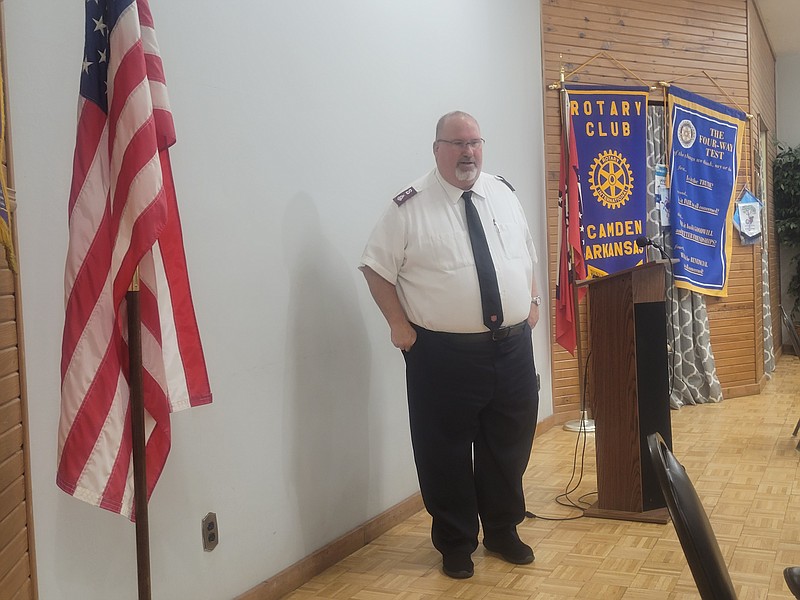 Photo by Bradly Gill Major David Robinson of the Salvation Army spoke to the Camden Noon Lions Club about the services his organization provides for seven counties in South Arkansas.

Major David Robinson of the Salvation Army spoke with the Camden Lions Club Wednesday at Catherine's Bistro about some of the services his organization provides in Ouachita County and surrounding areas.

"We've kind of expanded; we used to have three counties that we were responsible for, and now we have seven, so our responsibility goes from Monticello all the way to Magnolia. You have basically the bottom two rows of counties except for the ones on the end," he said.

He told the club that food security is a major concern in south Arkansas.

"That's the biggest thing we're seeing here and being asked about with our clients. We have people coming to get food that have full time jobs, families -- they just can't make ends meet and what little bit of food we can help them with helps them get over that hump," he said.

The Salvation Army partnered with Camden's Plant-A-Seed foundation to provide sack lunches during Spring Break and plan to do so again this year, Robinson said.

He noted that even though supplies are strained at times, something always pulls through and provides enough for them to deliver.

"We were serving about a 100 food boxes a month and now we're averaging about 1,25o a month. It's just been out of this world," he said. "So that's been a challenge, but just about when we think we're going to have to cut back somewhere, someone calls up and says 'Hey, I got a donation for you. We've done a food drive or we've done this'...God will find a way and open a door."

He also noted that the familiar site of a red kettle and bell ringers would likely return to Camden if he could gather enough volunteers, noting that the El Dorado campaign went well in the 2022 season.

"Christmas went well. Next year I would love to ring some bells over here, to find some volunteers to help coordinate that. Our goal was $70,000 this year for kettles and we did $73,000 and that was with just five kettles," he said.