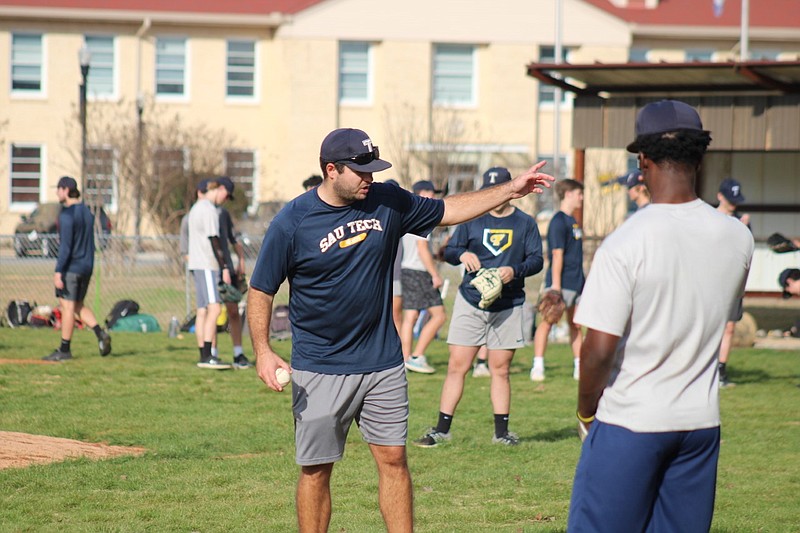 Photo By: Michael Hanich SAU Tech head coach Tanner Rockwell talks to his infielders during a drill at practice.

The heat is on physically and metaphorically for SAU Tech Rockets baseball team as they prepare for their inaugural season this upcoming spring.

Head coach Tanner Rockwell is excited for the program to lift off and start playing regular season games. Throughout the winter, the Rockets have been preparing for the season through the workouts in the weight room and through field drills. On Friday and Saturday, the Rockets will have a set of scrimmage against each other to see where the team is at with just a few days before the start of the regular season.

Coach Rockwell is looking to answer many questions on the field in these scrimmages. One key element that they are looking to solidify is the starting pitchers for the many games this season. "I think the big thing really that we're trying to figure out is exactly probably what fits better with our pitching rotation," coach Rockwell said when asked about what he wants to get out the scrimmages.

The Rockets have been loading on pitchers for the 2023 season, including transfers like former Arkansas State pitcher Jaden Woolbright. He will be a player that will key for the Rockets this season, but they will need several other consistent pitchers to call upon for the 56-game season. Part of finding the pitchers needed for the season includes starters, relief pitchers and utility pitchers to be used in unique situations.

Woolbright is a player that looks to develop himself this 2023 season at SAU Tech as he has signed to play for the SAU Muleriders next season. Joining Woolbright next season is right-handed pitcher Hunter Belton from Cabot, Arkansas.

Among the players that was highlighted by coach Rockwell that could be an early contributor to the team is outfielder Caden Brown from Central Arkansas, who previously played for the Central Arkansas Bears. Another transfer that looks to make an impact this season for the Rockets is former Little-Rock Trojans left-handed pitcher Asher Hastings. Coach Rockwell mentioned there will need to be four key pitchers they can label as starters for weekends and conference series.

When asked about the many freshmen coming into the program and playing collegiate ball for the first time, Rockwell said "We got a lot of young guys, so it's going to be fun to watch. There's a lot of them with talent that I'm excited to see get out and see how they handle a little bit older, more mature teams."

When asked about the challenge of the high school players moving up to the collegiate level, Rockwell responded, "it's a bit of everything, some of the biggest things that set it apart is just the speed of the game, it's quicker; that's from the mound, that's guys running down the first, that's defensively. Obviously, everyone wants to talk about pitch velocity, but really just the overall speed of the game in general."

Another aspect that coach Rockwell said is difficult for young players to get accustomed to is the heavy schedule. The Rockets will play 56 regular seasons throughout the season, which includes many games on the weekends and double-headers as opposed to the players participating in a few games a week in high school. This is why depth is so important in collegiate baseball. Rockwell and his staff not only have to coach and develop his players, he has to manage them and see how many games and what games they play throughout the season.

The Rockets have played in several scrimmages to prepare for the upcoming 2023 season, but this Friday will be the first time they will play on Pryce Robinson Field on campus, weather permitted. The hype for Rockets baseball will be at an all-time high on Friday before they start their season against Henderson State on January 27 and 28.