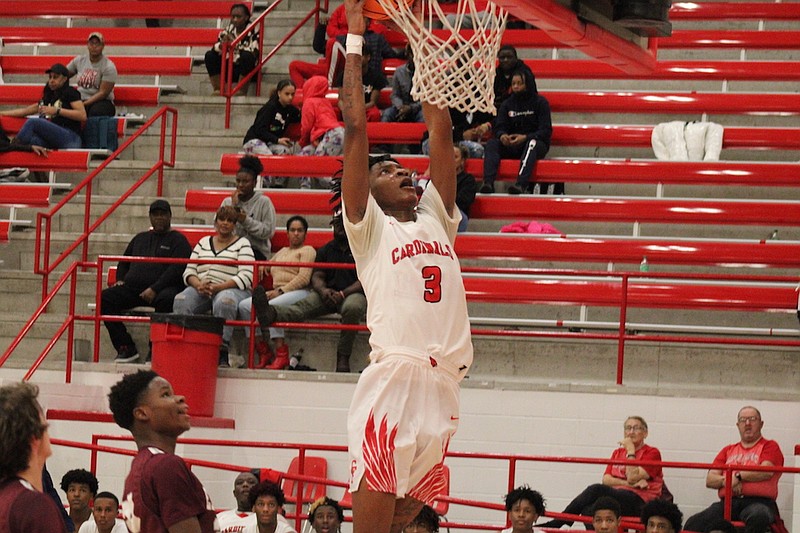 Both the Camden Fairview Cardinals and the Lady Cardinals had a rough start to conference play.

Both teams have followed those tough losses by re-establishing some solid connections on the offensive end of the court and playing more efficient defense.

The boys' team has won four consecutive games since the 0-2 start, with wins over Arkadelphia, Ashdown, and Malvern and De Queen on the road. They have won by an average of 10.3 points per game in the four wins. The Cardinals have done a great job of distributing the ball throughout the court and opening up the offense.

In the beginning of the season, the Cardinals benefited from the high-volume shooting of sophomore shooting guard Kyleston Gill. With the opposing teams focusing on shutting down the Cardinals' perimeter shooting, the Cardinals have had more opportunities to attack the basket from the paint or drive for layups.

In the 76-60 win over Arkadelphia, Cardinals senior forward Jarvis Reed led the team in points scored with 21. The next leading scorers for the Cardinals were senior guard JyMarion Hopson with 19 points and senior forward Traveon King with 16 points. Hopson, King and Reed became the big three offensive playmakers in the last three wins for the Cardinals. Hopson and King each scored 15 points in the 64-53 road win over the De Queen Leopards last Friday.

After the Lady Cardinals suffered a three-game losing streak to start conference play, the team was able to get back to the practice courts and redevelop the urgency and efficiency they need on offense and defense. The results came in clutch, with the Lady Cardinals playing more efficiently, particularly their experienced players, with much needed input from their young players.

The Lady Cardinals followed that performance with a similar 55-33 win on the road versus the Malvern Leopards last Tuesday. On Friday, the Lady Cardinals attempted to continue their winning streak against the De Queen Leopards, but they were unable to overcome the second consecutive road game and some questionable play calls. Camden Fairview lost that game 47-40.

The Camden Fairview Lady Cardinals (11-8; 2-4 in conference play) will look to restart a solid conference winning streak on Tuesday against the Hope Bobcats (2-5; 2-4).