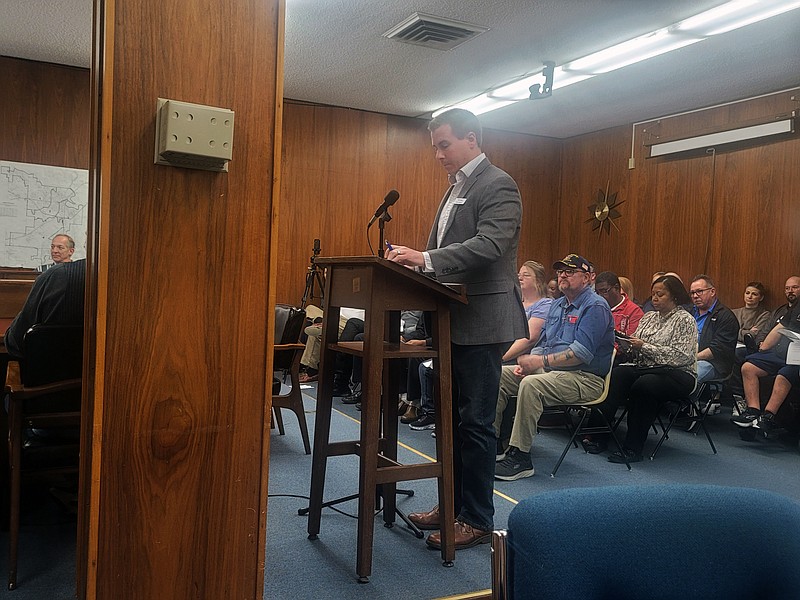 Photo by Bradly Gill Chris Wasson of Entergy addresses the Camden City Council about the progress of street light repair in the city.

Chris Wasson, customer service manager for Entergy, recently spoke to the Camden City Council regarding the repair of street lights in the city.

"We're hoping to be able to start fresh with that. The mayor and I met yesterday to be able to go over the proper way to get streetlights reported, which is very important," he continued.

Wasson said residents will soon be able to report outages via their phones and Entergy's app.

"We also have some new developments we are working on for our Entergy app, so that anybody can report it if they have our Entergy app on their smartphone," he said. "The main thing on that is safety; please don't use the app while you are driving your vehicle. We want to to keep everybody safe, but if you see something on your corner, you can report that safely. We're working on that with our app that makes it very easy and user friendly to report a street light out. "

Ward 3 Council member Ebony Gulley stated, "It was discussed, if I recall correctly, that Entergy was using a third party to replace these lights and that third party did not have access to the same map that you all have in order to fix all the lights."

Wasson confirmed that Gully's statement about the company's use of a third party for street light repairs was accurate.

"We are using a third party, it's due to making sure we keep up with all streetlights... It helps keep up with the volume. They don't have access to some of the internal maps we use. As you can imagine, some of that is just an access issue," he said. "We provide them with tickets, which provides them a street light number -- most of the time you see them on the pole it's just a little aluminum tag that goes horizontal on the pole and it will have 'SL' on it and a number. We just need that number and if it's at an intersection we need that intersection, that's the same information we've been requiring, but it just helps that person get there."

When asked if there was a "point man" that council members could contact who would contact Entergy, Wasson said they should speak with Kevin Franklin, director of public works, who reports the outage tickets to Entergy.

Gulley asked about the average time it takes to fix a light pole.

Wasson said, "Our goal is three days. Whenever we get that lighting ticket in, our g0al is to have that done in three days."

But sometimes it can take longer to fix a street light, Wasson noted.

"We're also seeing some supply chain issues in our local economy. I never thought I'd see the day when we had a hard time getting a high pressure sodium lighting or LED lighting," he said. "Barring that our goal is three days."